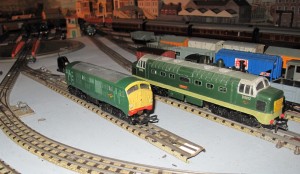 At the beginning of the year I bought a couple of Playcraft wagons which were made by Jouef for the UK market. I also gave a link to the Playcraft site. Now thanks to ebay I have added a Playcraft loco but one with a bit of a difference. This one has a HD B0-Bo chassis under the plastic body of a Playcraft D6100 diesel. There is absolutely no 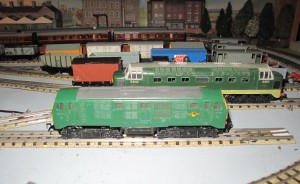 modifications to the HD chassis and as a result is an excellent runner with good pulling power and of course HD couplings. The D6100 is a model of a Class 21 diesel whereas the HD Bo Bo is a model of a Class 20 diesel. Clearly my D6100 now has the wrong bogie frames and seems to have been repainted into Brunswick Green with full yellow ends but within the bounds it looks and runs well. As mentioned in my earlier post Playcraft was made to the continental HO scale so how does it fit in? Well in actual fact it is hardly noticeable as the D8000 BoBo was a pretty big engine. The prototype Class 20 is 46 ft 9 ins and the Class 21 was 51ft 6 ins so in real life the difference would certainly have been noticeable but in 00 gauge, 4 mm = 1 ft the difference amounts to 20 mm which is less than an inch so not really a problem. Another one to add to my modified HD locos rather than a Playcraft original.

Strangely as part of the same purchase the seller included an original D6100 in 2rail form. This looks as if it has hardly been used but whenever it was used it must have been dropped as it has a broken buffer beam. It is of little use to me as a 3 rail only runner but an interesting historical piece of kit.

One thought on “More Playcraft”