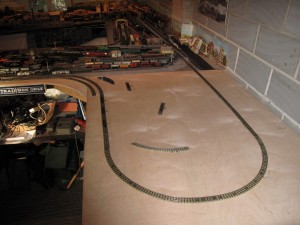 much track that I will have to buy.

I then used what spare track I had to loose lay the inner track between the old track joining points.

On completion the temptation was to run a train. So I picked the easiest an 0-6-2T and applied the power. Off it went slowing down a little at the far end of the new section, I will need to add an extra power source here, as 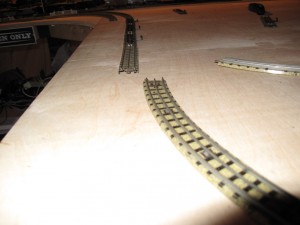 Then I compared the loose laid track with the Xtrk and found that I was a 1/4 length rail missing on the bottom track and yet it fitted.

Agood look at the track showed that some of 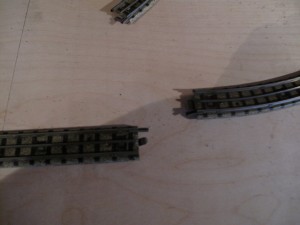 the joints were not totally square and that this was enabling the track to be joined. Squaring up the joints led to gap but not as big as a quarter rail, probably nearer the short rail. It looks as if one is required on the bottom track and another between the curves to enable a proper fit.

But this is still not the same as the computer programme. Now my layout is not square as one of the walls of the workshop is at an angle so this has to be worked out as the track progresses so this is probably the reason. However this ability to join rails and make a track circuit which is not square could be the route cause of the well known problem of phantom decoupling. I will be investigating this further when it comes time to get serious about laying the track.