I have always maintained that I collect and play with toy trains because that is what they were made for. They are not super detailed and you have to use your imagination to believe that they represent real trains . Nothing wrong with that. 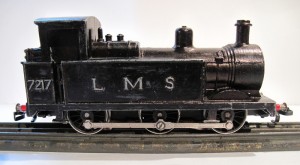 However I believe I may have hit a new High or Low depending where you are coming from with one of my latest acquisitions. There were two die cast locos on ebay for silly money which I bid on and won, 2 locos for under £25.00 including postage.

On receiving them it was obvious that both had mechanisms from modern Hornby converted to three rail and they both ran very well.

Research on the web showed that the 0-6-0T was definitely a very early Budgie die cast push along loco vaguely based on a Jinty but with a cab roof based on a high rise block rather than a steam engine. In fact if you go to Budgie Diecast Toys websites and there are a few the only model they show is a British Railways version in red or green but which is based on a different casting. I did find a green LMS version but it must have been sold and as I forgot to bookmark it I can’t find it again but I think that it was Budgie or a forerunner of this company. Clearly mine has been repainted, not very well in BR Black but with the LMS and the number embossed in the diecast. As already mentioned it is a good runner despite having a strange 3 rail pick up conversion which is 2 parts but traverses points and X crossings with no trouble. 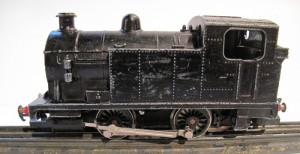 The other one remains a mystery. It is a diecast 0-4-0T, dock shunter type with the Hornby mechanism which has outside cylinders but no clear indication as to whether the original engine had this feature.

I have tried to find it on Google but without any luck so far. This one runs really well and looks good. Again the painting is poor and there are no numbers and it seems to have the mechanism for working an Autotrailer on the side of the boiler. This has the same type of 3 rail pick up as the Jinty.

Anyone out there got any ideas on the manufacturer. Click on the picture to get a bigger version. Comments are always open so if you have any ideas please post.