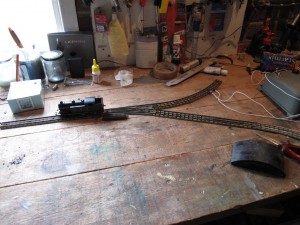 Given the position of the faulty electric point there was no way of really investigating what was going on. It was just a matter of watching the engines derail every now and then. So having removed the offending point and replaced it with a manual one I set up a small test track to try and find out what was happening and see if I could correct it. A picture of the test track is shown left.

The test track faithfully reproduced the 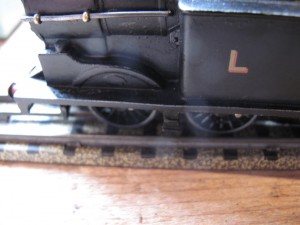 problem which is shown in the second picture. The engine was jumping off the track just after it had been through the point. I looked and felt and checked and looked again. Nothing was obvious but out came the fine wet and dry paper and polishing of all of the possible surfaces was done to ensure that there were no protrusions even if I couldn’t see them. After a fair amount of polishing replacing, derailing more polishing I finally got the 0-6- 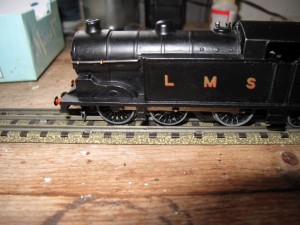 2T to go through the points 30 times without derailing. I thought that I had cracked it. So out came the other problem engine, the Silver King and it worked a treat for the first 3or 4 times and then it derailed. A little more polishing and checking made no real difference.

2) The wheels on these two engines are slightly out of gauge.

There are no other points on the layout that causes problems for these engines so it really must be the point. But I don’t think that it is repairable.

I had my new points on order so it was a matter of waiting for them.