So I did go to the train fair but there was nothing there to attract me. I have to say that there was more there than usual with some very nice super-detailed wagons and coaches but the prices were on the high side which surprised me given the current financial situation. It was pretty clear though that a lot of people were looking and picking them up no one was buying. A rather tatty LMS 0-6-2T was at a good price but although I pondered no purchase was made. Good to look though. 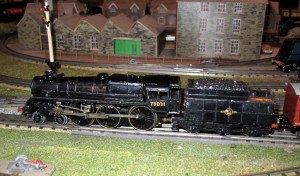 Ebay was once again my undoing as a rather nice BR Standard was purchased at a very attractive price. Although the paintwork needs some TLC it is a very good runner. Its background is a bit of a mystery, the seller described it – IT HAS GOT A KIT BUILT METAL CHASSIS, THERE IS NO IDENTIFICATION OF THE MAKE OF THE METAL CAST BODY AND TENDER, IT HAS BEEN NUMBERED 73031, Certainly the motion is very complicated and well built and the pick ups are of the sprung copper type so probably the kit built seems right. I have not taken the body off to see what motor it has. I will do some research as it does seem m to be a cast body not a brass one. Off to Google some kit manufacturers. Very nice addition to the loco fleet.

The body is by Trix with a handbuilt chassis.