The problem with a website using the blog format is that everything is treated as news and as more posts are added the old ones move down the page and then end up in the Archive. This can make it very difficult to find anything. So I am hoping that this page will provide information and pictures of the HD locos which is easy to access and overcomes both the archive problem and possibly the need for a separate gallery. You can click on a picture to get a full size version and then scroll through all the pictures on the page. 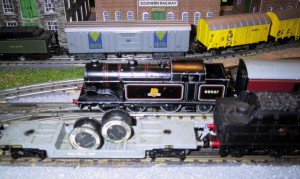 The first was the ubiquitous 0-6-2T tank engine based on a LNER N2 prototype in BR Livery with the number 69567 and no coal in the bunker. This loco was the first one introduced by Meccano in the new Hornby Dublo range back in 1938 when it was available in LNER, LMS, GWR and Southern liveries. It is very poorly detailed and only received coal in the bunker towards the end 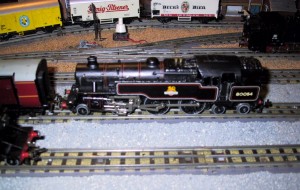 of the of the Meccano company which was taken over by Triang in 1964.

The second was the 2-6-4T BR Standard 4MT. A well detailed model for its time, a pretty good runner although the front bogie has a tendency to derail if the track is not well laid. As a 3 rail this was numbered 80054

My third loco was Silver King a model of the Gresley A4 pacific 4-6-2 in BR Green and numbered 60016. Those three locos plus an old one I had been given by a neighbour was the basis of the HD collection.

It turns out that the old engine wasin fact a prewar 0-6-2T in Southern Green and is pretty rare. It has the prewar connectors and comes with a Southern brake van which is also pretty rare. Worth something if they were mint and boxed but they are in fact well used but very nice. Then I discovered the Michael Foster book of Hornby Dublo and the collecting started. 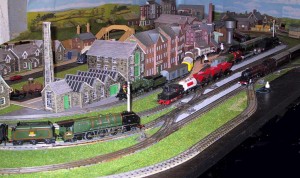 This book is essential reading for anyone interested in HD and tells you everything you would ever want to know about HD, locos, rolling stock buildings and accessories. So if you want a picture of every HD loco made in the order they were introduced including the very rare ones look in the book.

This selection contains my locos in approximately the order I bought them.  The Duchess of Montrose is always easy to find and this was added to the collection followed by a Bristol Castle which was in very nice condition. Then came a Duchess of Atholl which was introduced before the Montrose, has no smoke deflectors and is in pre-nationalisation LMS Crimson Lake. Then came Sir Nigel Gresley, introduced pre-war with full valences and very valuable but re-introduced after the war with cut away vrunner shown with two Gresley teak carriages but now pulling four and looking very good with its red painted wheels just like the real one.alences but still in LNER Garter Blue. A lovely loco and an excellent runner. 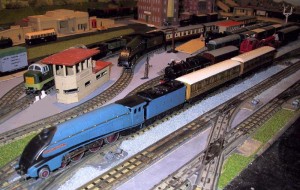 I also have a gloss version of the Duchess of Montrose. The Silver King also came on Gloss and Matt versions.

One more steamer was added to the collection before I found the diesels and this was the 7F loco which was a 2-8-0 engine mainly used for goods trains but also happy to pull carriages if required and had a good turn of speed despite its small wheels. This is the half inch motor version, the later one with a Ringfield motor is rare and very expensive – a good reason not to have one. 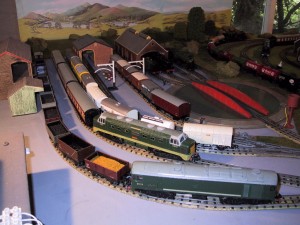 So the collecting started in 1998 before digital cameras, broadband and ebay and progress was slow via Swap Meets, a local model shop which sometimes had three rail and the Virtual Swap shop on the net which had people offering lists of HD for sale and by 2002 I was up for a change and looked at the diesel range.

Here we have two of the diesels in one picture. Nearest the camera is the Metro Vickers Co-Bo, an ugly prototype and an ugly and unpopular model. In direct contrast 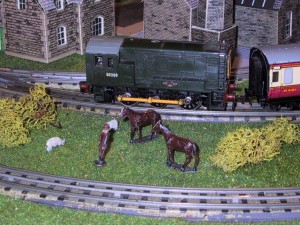 to the other which is the HD “version” of the mighty Deltic with its 2 Napier engines and rapid progress up the East Coast Mailine their only fault in some peoples eyes is that they replaced the A4’s. I say version as the HD model was considerably under scale length and the front end is out of proportion to the original. The 3 rail version of this engine, St Paddy is rare and very expensive, my one is a 2 rail body, Crepello, on a 3 rail chassis. 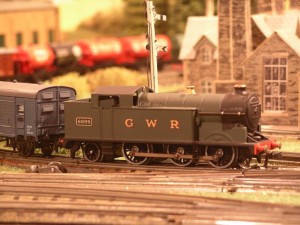 Finally on the diesels at this stage was a Class 8 shunter re-painted with a yellow front and yellow connecting rods. then came the un-named, unnumbered Deltic which HD sold before the final Deltic livery was agreed by BR.  This had a slightly different body to the final Deltic and remained on sale throughout. 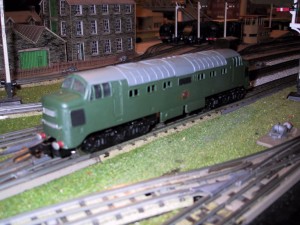 Then came a GWR version of the 0-6-2T which is pretty rare. I also have a LMS version but I can’t find a photo at the moment – perhaps laters.

One of final HD locos is the fairly hard to find Dorchester which is a rebuilt Bulleid pacific and can attract high prices if it is mint and boxed. My one is not boxed and has been super detailed which effects the value but still looks good running around the layout

So is that really my HD collection without the mods and re-paints. I need to check that I have not missed one or two.

Whilst this search for engines was going on I was also collecting the rolling stock. An example of each of the tinplate rolling stock

was easily obtained if it was BR but I did not get into the pre-nationalisation stock in any great detail. A train of LMS coal wagons, a lovely collection of tank wagons and one example of each of the super detailed wagons except the bogie tank and the tractor on the flat and the …….. well some were just too expensive. So at this stage collecting was overtaken by running interesting trains with conversions and even modern rolling stock. So we move onto the

Go to the next section, HD Modified, which details HD engines which have been re-painted or re-bodied or generally changed e.g. 2 rail conversion to 3 rail