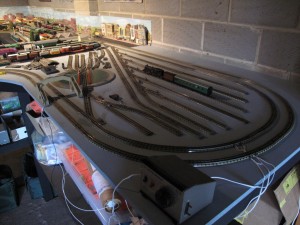 My layout has no electric points. I never saw the need for them as I can reach all the manual points although some with the aid of a metal bar assister. However on the extension layout there is one point into the main sidings that is a stretch and is behind another line of trucks and is therefore difficult to reach without knocking over something. So, as I had an electric Left Hand point in my track box I decided to put it in that position. 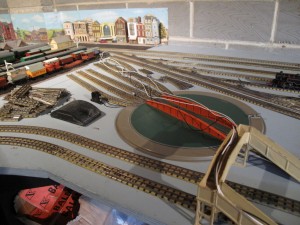 Rough wiring was put in place and I used the passenger bridge to guide the wires over the track. Having put it place the engine testing started. All seemed to work well on the dodgy engines. Dodgy engines are defined as those which have a history of de-railing at the slightest opportunity. The worst is the 2-6-4T with its front bogie when going forwards and is rear pony when reversing. This is a well known problem engine. The second one to check is the Duchess of

Montrose when reversing as its rear pony wheels are prone to derail. These two were fine. So like a fool I decided to put in permanent under board wiring before completing the test work. 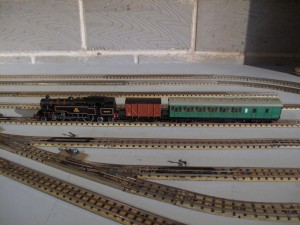 as the tricky ones. 2-6-4T, no problems, Montrose, no problems, the converted Hornby Schools class, no problems, Metro Vick the same. Whats left well I ought to try an A4 and although its bound not to be a problem and an 0-6-2T as well.

You guessed it – problems.

The tank would not go throughthe point at all when reversing from the siding onto the mainline, it just stopped with bang every time. Point or engine? Well after a lot of head scratching and checking I noticed that the three rail pick up was slightly not parallel so I adjusted it and bingo all was fine, Engine then. Turn it round and drive it through  the points forwards and it derails just after the point. Not every time but about 10% of the time. Dodgy engine so lets move on. Silver King is put to the test. Reverses into the siding fine but again de-rails about 1 in 15 attempts when leaving the siding.

Out comes the sandpaper, minor smoothing of rails and joins, make sure that the check rail is clear of debris and wide enough to allow the flange through, all of this done by stretching right across the layout. Minor adjustments made, time to re-test. Out comes another A4 from the stable. In and out 20+ times – no problem. Sorted. Silver King comes into play and after about 10 times it de-rails. Now Silver King sits on the layout in the engine shed and to get in and out it has to cross 5 points in and 5 out and has never de-railed once in all the time that it has been stabled there. So its not the engine but the point.

Out it comes to be replaced by a manual one from the box, Try the 2-6-4T and it derails the pony wheels every time. Remove point and replace it with on of the boxed and very good isolating points which I bought especially for this application and which I soldered a wire between the main line joints so it is now non-isolating. Testing has restarted,

What I now need though is an excellent electric point.